The Mystery of the 1960 Thunderbird Fan Shroud

Supposedly a few late model 1960 Thunderbirds with air-conditioning were equipped with fan shrouds. No one has been able to document that these were put on at the factory. The 1962 and 1963 Full Size Fords with air conditioning were documented to have been delivered with a two-piece metal fan shroud (part numbers C3AZ 8147 B and C3AZ 8148 B). It also retro-fits to the 1960 and 1961 Full Size Fords. I have been able to obtain one of these rare pieces and have found it to be a perfect fit on the 1958, 1959 and 1960 Thunderbird radiator. These Thunderbirds were notorious for running hot. This fan shroud may be a solution for many 1958 to 1960 Thunderbird cooling problems as it is being reproduced in fiberglass by Dearborn Classics.

The bottom half of the shroud attaches to the bolts holding the bottom of the radiator.

The 23 3/16 length of the top of the shroud fits exactly in the indentation on the fan side of the upper radiator support.
The radiator support needs to have two holes drilled 18 7/16 inches apart to mount the shroud. The shroud is attached by two short screws. Long screws will penetrate the radiator.

The two halves are held together by a screw through a speed nut.

Upper part of fan should in place. Shroud needs to be attached to the upper radiator brace with short screws.
The hood closes with no interference. 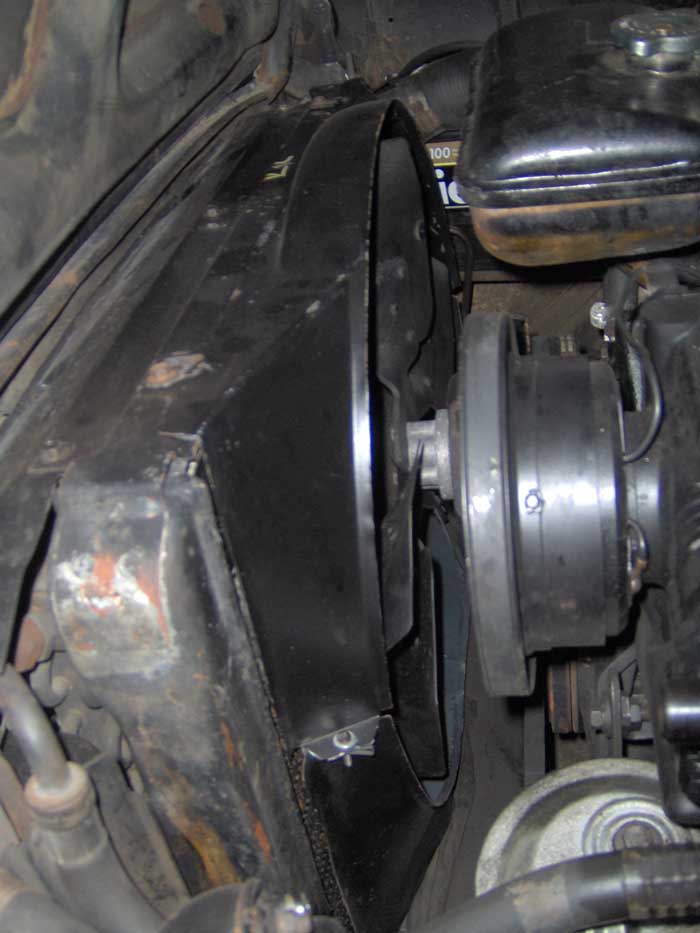 Stock radiator with shroud. Shroud fits perfectly using only four bolts. Radiator braces need to be drilled and tapped for bolts. Make sure top bolts are short enough that they do not break into the top of the radiator core. 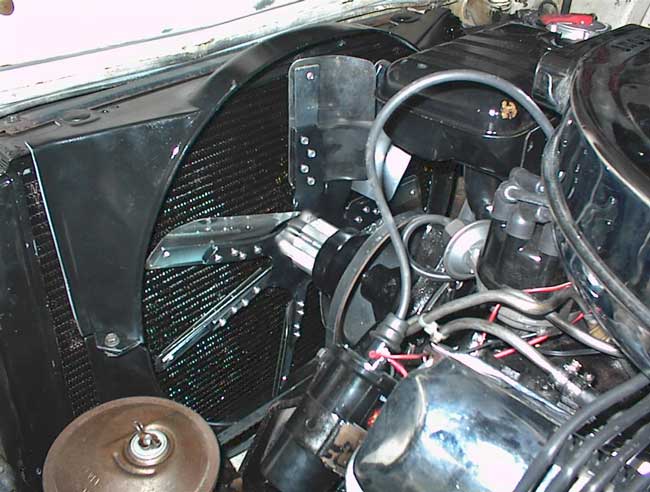 This is the Dearborn Classics fiberglass reproduction 1960 shroud on a 352 cid equipped Squarebird. 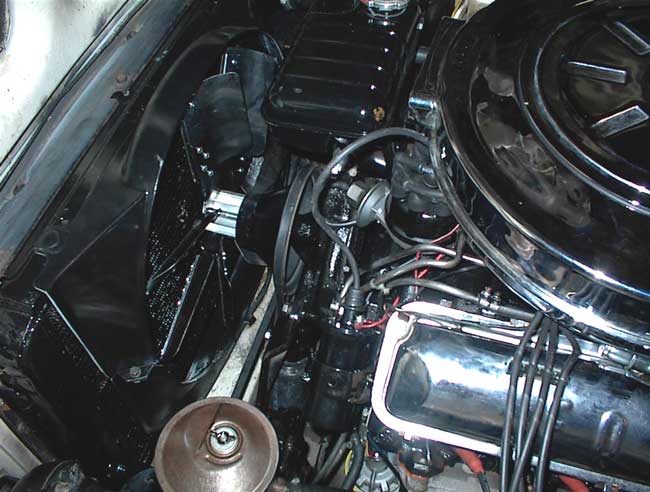 Another view of the Dearborn Classics fiberglass reproduction shroud installed.

John Byers installed the Dearborn Classics fan shroud on his Thunderbird and supplied the pictures of the installation above. As you can see, it's not an exact fit. It's pretty darn close though. It's just a matter of centering it. Easiest with the radiator removed. Then just drill the holes in the proper location on the upper & lower radiator mounting flanges. He ran the car for just over an hour idling. It was at least 90 degrees Fahrenheit that day, maybe 95 degrees. It never went over 190 degrees Fahrenheit. Radiator temperature was taken with John's state-of-the-art meat thermometer dunked in the surge tank. For the most part radiator coolant temperature remained at 185 degrees Fahrenheit. In John's opinion the shroud will solve the overheating problems these cars have when sitting in traffic.

I recently bought and installed an ABS fan shroud from the Bird Nest.  It was about $50 cheaper than the Dearborn Classics fiberglass shroud.  The fit is really pretty good; it uses all existing hardware, so no drilling into the radiator is needed.  Notice that in the pictures, there is only one rivet per side; the kit comes with added rivets to install, I just hadn't installed them when the pictures were taken.  I plan to touch them up with black paint during the final assembly. 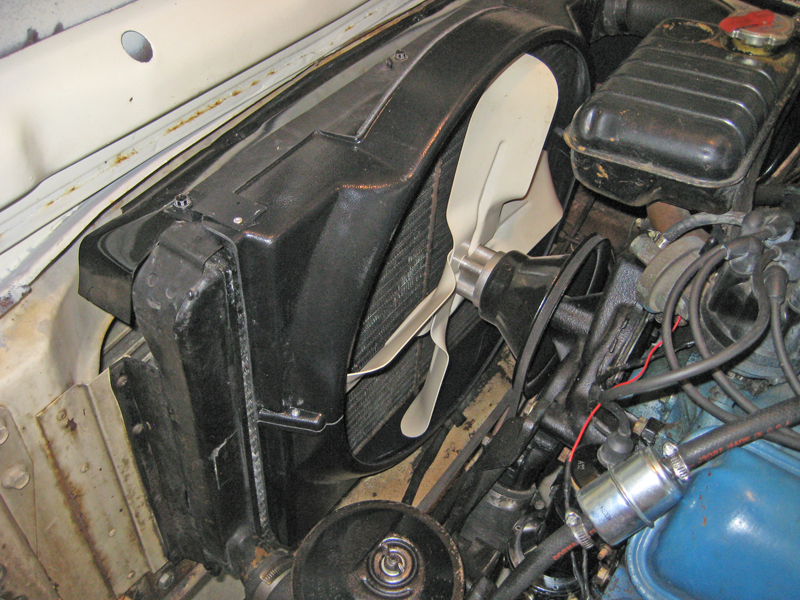 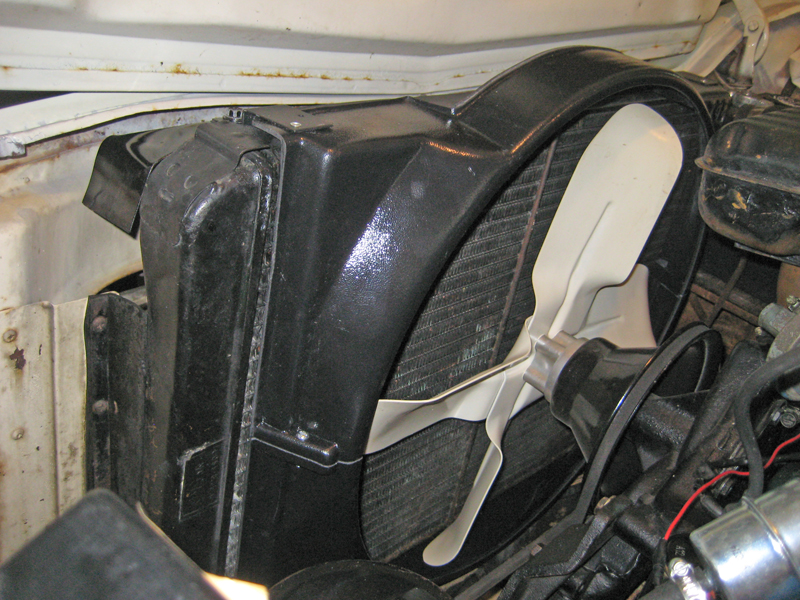 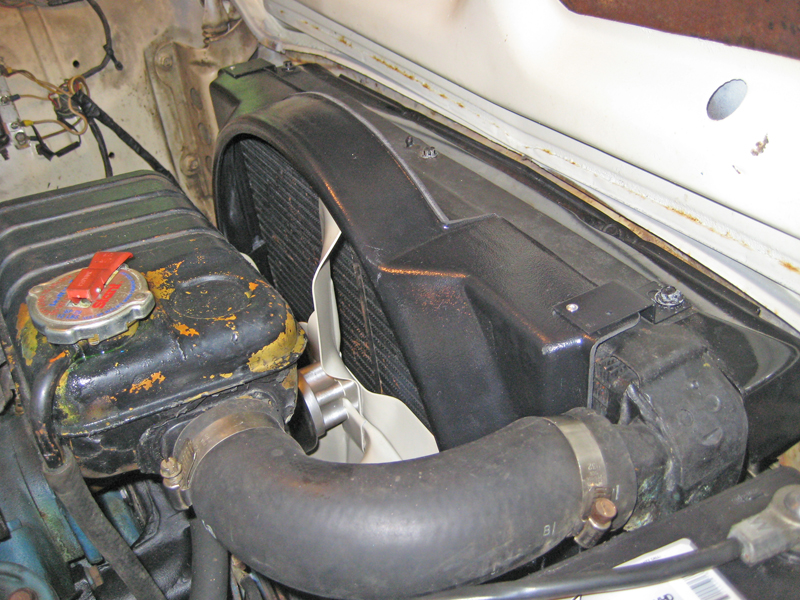